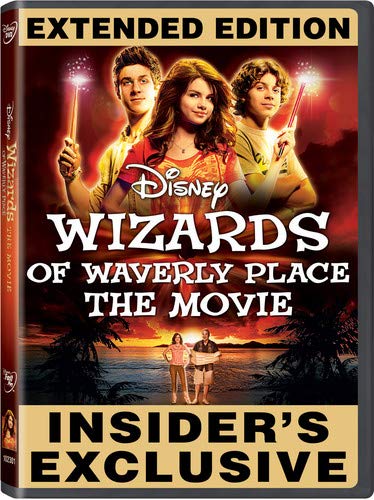 Brand : Selena Gomezjake T Austinlev L Spiro
from USA
to Italy
in 5-8 days
At your doorstep by Jan 23  to Jan 26 with standard delivery

Product Description ------------------- The most magical event of the year is now even bigger, with more thrilling adventure! WIZARDS OF WAVERLY PLACE THE MOVIE EXTENDED EDITION features exclusive footage, behind-the-scenes bonus and awesome extras that take you deeper into the mysterious world of wizardry! Embark on a supernaturally exciting adventure as the Russos, your favorite family of wizards-in-training, join together on a quest full of heart-stopping action and hilarious magical mishaps! While on vacation, Alex (Selena Gomez) accidentally casts a spell that threatens her family's existence! Max (Jake T. Austin) tries to keep his parents together while Alex and Justin (David Henrie) use every trick they know as they search for the "Stone of Dreams" to reverse the spell and save their family. You won't want to miss one extraordinary moment of this extended, magic-filled and action-packed movie! .com ---- The Disney series Wizards of Waverly Place has spawned its first full-length movie, and the film is full of out-of-control magic, teenage angst, and challenging family dynamics. Alex has never lacked attitude, but when she disobeys her mother, almost wrecks the diner, and risks the lives of herself and her friend Harper, her feistiness lands her in the middle of a magic-free Caribbean family vacation in which her attitude may just spoil the trip for everyone. Unbeknownst to their parents, Alex smuggled the forbidden book of spells into her luggage, and even the perfect Justin was unable to resist bringing along the family's all-powerful magic wand. After days of turning up her nose at her parent's romantic reminiscing and complaining throughout every family activity, Alex shouts out an impulsive wish that her parents had never met one another. The problem is, Alex is holding the family magic wand when she makes the wish and it instantly comes true. As Alex, Justin, and brother Max begin to realize the dire implications of their new situation, they try every spell they can think of to reverse the wish. When nothing works, they look to a street magician and his bird to help them find the stone of dreams, an important wizard artifact that possesses unlimited power. Their quest is filled with peril, but as Justin and Alex make their way through each challenge, they begin to realize how much they need one another and how important family really is. In the end, Alex and Justin are forced to compete against one another in a life-changing battle from which only one sibling can emerge victorious--the question is, even if one of them wins, will the family still lose? Also included on the DVD is a 10-minute bonus feature highlighting on-location fun and photography in Puerto Rico along with some of the cast members' favorite stunts, effects, costumes, and props. (Ages 7 and older) --Tami Horiuchi
Show More
Reviews

Disclaimer: The price shown above includes all applicable taxes and fees. The information provided above is for reference purposes only. Products may go out of stock and delivery estimates may change at any time. Desertcart does not validate any claims made in the product descriptions above. For additional information, please contact the manufacturer or desertcart customer service. While desertcart makes reasonable efforts to only show products available in your country, some items may be cancelled if they are prohibited for import in Italy. For more details, please visit our Support Page.